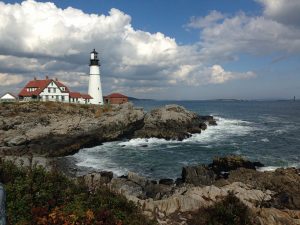 With an area covering 35,380 sq. miles, Maine lies in the north-eastern corner of the US. It has a population of around 1.3 million. It shares its borders with the Atlantic Ocean, the Canadian provinces of New Brunswick and Quebec, and New Hampshire. Maine shares its border with only one other state.

Famous for its rocky coastline, rolling mountains, dense forests, and scenic waterways, it offers an array of delicious seafood cuisine, like lobsters and clams. Nearly 80% of its land is covered by forests with trees sugar birch, yellow birch, aspen, fir, spruce, and pine, making it a natural attraction for tourists. The coastline of Maine which extends from Cape Elizabeth to Rockland comprises estuaries, peninsulas, and coves. The climate is mostly humid

Maine’s most populated city is Portland, and its capital is Augusta. Historically, Maine was among the world’s largest pulp-paper producers; however, it now has a flourishing service and tourism industry. Other major cities are Lewiston, Bangor, South Portland, Auburn, Biddeford, Saco, Westbrook, and Waterville. Some upscale areas to live in Maine are Cape Elizabeth, Falmouth and Yarmouth in Portland. Certain suburbs of Maine like West End, Cumberland South, Cumberland, and Scarborough have stately homes with amazing architecture. Needless to say that beautiful homes need to be protected with the right kind of insurance.

According to a report published by the Maine Emergency Management Agency, Maine has the 16th highest per capita lightning casualties rate in the US and experiences an average of about 60,000 cloud-to-ground lightning flashes each year. The entire State is susceptible to severe winter snowstorms combined with high winds, and freezing rain as well as severe summer storms each year.

According to the Insurance Information Institute, the annual premium amount paid by homeowners in Maine is $882 on average, while the amount for those who rent homes is $149.

Along with natural disasters like hurricanes, storms, earthquakes, and wildfires, insurance companies do provide cover for damage due to power outage, plumbing leaks, mold damage, roof damage, theft, vandalism, etc. Understanding your insurance policy clauses, then establishing the coverage related to the damage, and the resultant paperwork including communicating with your insurance company can all be difficult and time-consuming. Having a public insurance adjuster right by your side can ease these problems.

Maine State Licensed Public Adjusters are professional claims handlers who represent the policyholder in appraising and negotiating an insurance claim. At Experienced Public Adjusters, Maine, we have qualified and experienced public insurance adjusters who serve your best interest and assist you to collect the maximum possible compensation for your loss.